Honda Powersports and Harley-Davidson Inc. announced they will cut ties with a Northwest Tennessee motorcycle and ATV dealership after a racist social media post was allegedly made on the owner’s Facebook page, following suit with Polaris Industries.

The post is said to have been made on the Facebook page of Russell Abernathy, the owner of Abernathy’s Cycle in Union City which sells Honda, Polaris and Harley-Davidson products. According to screen shots shared on social media, the post stated, “I’m sick of this black lives matter” and called for those involved in the Black Lives Matter protests to go “back to Africa and stay”.

In response, Polaris announced last week that it would part ways with the dealership unless Russell Abernathy was no longer the owner.

Last week, comments attributed to the owner of a multi-line dealership were posted that do not align with Polaris’ commitment to welcome all riders. The dealership has published an apology, and the owner has agreed to step aside in favor of new ownership who would maintain operations, thereby preserving the livelihoods of nearly 100 dealership employees and supporting the Polaris customers that rely on the dealership. Should that transfer not occur, Polaris will terminate our relationship with current ownership.

Wednesday, Harley-Davidson followed with a statement announcing that Abernathy’s Cycle “will no longer be part of our dealer network.” 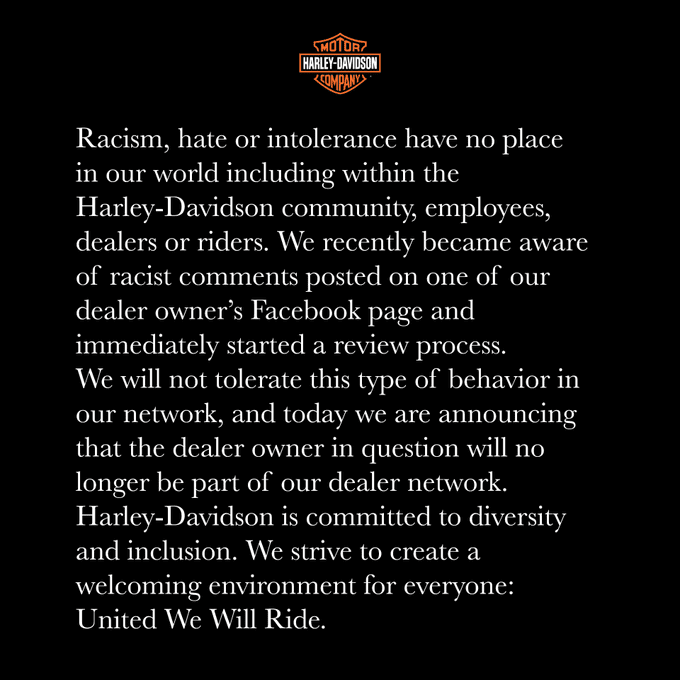 A statement has been posted on the Abernathy’s website and Russell Abernathy denies making the comments and apologizes for its impact.

Regarding the social media post attributed to me on 6/12/2020. I, Russell Abernathy, did not post this comment and reject the content of it. I, and by extension Abernathy’s Harley Davidson, have been and will always be welcoming to all riders regardless of race. The derogatory nature of the comment in no way aligns with my personal beliefs or that of Harley Davidson Motor Co. It personally saddens me that this post has caused such wide-reaching pain to those that have already been subject to so many social injustices. I vow to make certain that Abernathy’s Harly Davidson provides a positive environment of diversity, equality, and inclusion for all.

Based on the results of the investigation to date, American Honda issued a Notices of Termination to Abernathy’s Cycles on June 25, 2020, for all new Honda Powersports products sold and serviced by the dealership.

American Honda’s Notices of Termination are subject to requirements governing dealership terminations under Tennessee state law, but the termination process is now underway.

American Honda strongly believes that racism and intolerance have absolutely no place in our company and must have no place in dealerships authorized to represent the Honda brand.